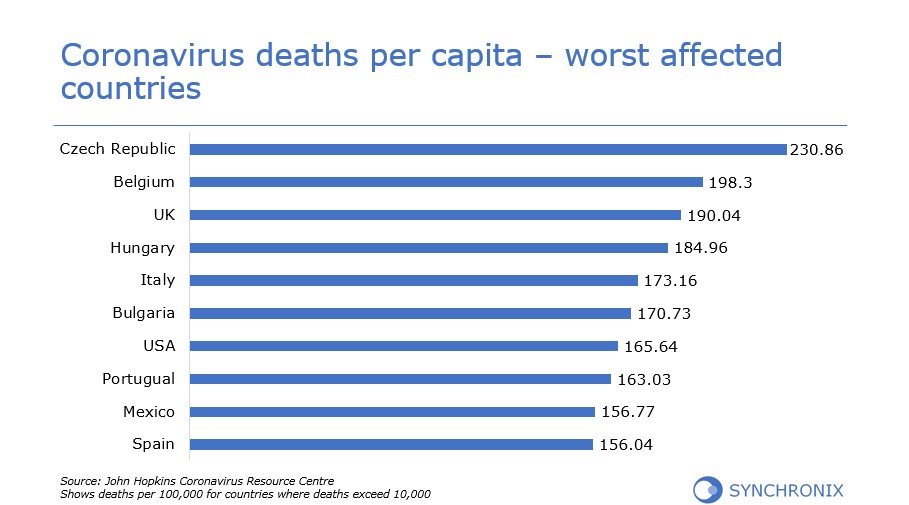 As vaccinations roll out, we are beginning to see some light at the end of the covid pandemic tunnel.  It will take a few months yet, but it seems almost unreal to think that by the end of 2021 we may finally be back to some kind of post-pandemic normality.

Now seems like an appropriate time to take stock.  What might we learn from the traumatic events of the past year?  We might ask ourselves the question – why is it that some countries appear to have faired so much worse with Covid than others?  How have some countries experienced relatively low death rates, whereas others have experienced such tragically high numbers?

Other countries have escaped relatively lightly.  Amongst the other European nations Germany has suffered significantly less – ie, experienced a death rate less than half that of countries like the UK, Belgium and Hungary.

One thing we might look at is the quality of healthcare.  More developed countries generally have more established, advanced and comprehensive healthcare. That being the case, such nations should be better placed to deal with a pandemic such as covid.  Unfortunately, it is plain to see that there must be a lot more to it than this; with countries like the USA, UK and Italy all suffering badly despite their relatively advanced healthcare systems.

India has a comparatively small proportion of deaths (under 12 per 100,000 on official figures).  Despite this, India’s healthcare system is ranked only the 112th most efficient healthcare system in the world according to the WHO.  The USA is ranked 37th, the UK 18th and Italy 2nd.  Clearly there must be other factors at play.

One factor is potentially under-reporting.  One source estimated that this could mean that the true level of covid deaths is as much as five times larger than the official numbers in India.  However, even taking that into account, India’s death rates have still been significantly lower than those of the ten hardest hit nations.

Whilst the standard of healthcare has no doubt played some role here, there are clearly other aspects involved.

One factor is population demographics.  Older patients are much more likely to become seriously ill and die from covid than younger ones.  Here India’s age demographics counts in her favour.

Of the 10 hardest hit countries, 8 were nations where 19% or more of their populations were aged over 65.  The USA has a slightly younger demographic (16% over 65s) which would help to limit its vulnerability a little but is still clearly more exposed than somewhere like India.

Mexico represents the odd one out here.  Only 7% of Mexicans are aged over 65, giving the country a youthful demographic that is closer to that we see in countries like India.  We must therefore look for other explanations as to why Mexico has suffered so badly.

Covid spreads best in environments where people live in close proximity to each other and, in general, people living in towns and cities are more likely to live in closer proximity with others.  Indeed, although India in general has seen lower death rates, it has nevertheless suffered more in major urban centres like Mumbai.

Many of the countries that have been worst hit have high levels of urbanisation which has likely contributed to higher death rates.  Belgium has an particularly high level of urbanisation (with 98% of its population living in urban environments), making it especially vulnerable in this sense.  Several other countries on the list have high urbanisation levels (80%+), namely the UK, USA, Mexico and Spain.  A country like India has much lower level of urbanisation overall (36%), which means its population is more widely dispersed and people in more rural environments are therefore less likely to come into frequent contact with others who might be affected.

The lockdown measures taken by different countries at different times would also have an impact.  However, as these measures are often taken in response to the pandemic getting out of control in the first place, it is no surprise to find that many of the countries with the worst rates have had to impose longer and stricter lockdowns.

According to the Oxford Covid Government Response tracker those countries on our list that have taken the strictest measures for the longest periods of time over the course of the pandemic would include the UK and Italy.  This has not prevented either country from registering high rates however, although it has no doubt helped to prevent the problem getting even worse.

Based on these measures, those countries which have been laxer from this list would include Bulgaria (most notably), the Czech Republic, Hungary and Belgium.  So, it is possible that in these cases a more relaxed approach has contributed to a higher death rate.

Another factor would be the efficiency of a country’s testing and tracing regime.  On this measure Mexico does especially badly, having only managed to test 41 out of 100,000 people in its population to-date – far fewer than any other country listed.

Nevertheless, the UK has now tested 1,585 people out of 100,000 – more than any other country on the table.  Despite this, the UK still has the third worst death rate overall.  But here the devil lies in the detail.  The UK has massively improved its testing regime over the course of the pandemic but, initially, the UK lagged behind somewhat.  During the first 60 days after the first five UK deaths the British managed to test just 23 people in 100,000.  This compares poorly to a number of other affected countries.

Germany’s lower death rate overall is partly down to its test and trace efficiencies, especially during the early phase of the pandemic.  The Germans managed to test 37 people in every 100,000 during the first 60 days after their fifth death.

Of all the countries on the list, Mexico stands out as the most behind on test and trace at every stage of the pandemic.  No doubt this is a major reason as to why the country now ranks so highly in terms of death rates.

Another factor is the level of international travel.  Countries that experience a large volume of people travelling through their airports and transport hubs are more likely to import covid from overseas.

Of course, travel restrictions now apply across many nations but this was not always the case.  The UK and the USA would, under normal circumstances, see significantly more international traffic than most other countries.  And so they, along with Hungary, would have been most exposed to importing infection in the absence of strict border controls and quarantine measures.

It is worth taking time to consider the Czech situation, since this country has experienced the most serious problems to-date.

In terms of many of the risk factors nothing immediately stands out that would explain why it tops the list.  The level of urbanisation is high but not unduly so at 73%.  Likewise, its population demographic is not notably different from many other European countries (20% aged 65 plus).  It also receives limited international traffic compared to many other countries.

However, over the course of the pandemic its lockdown measures have been the second laxest of the ten worst affected countries.  It is also the case that its figures for test and trace do not appear as comprehensive as many others (although it appears to be testing a reasonable amount of people now).

According to Dr. Rastislav Maďar, the dean of the University of Ostrava’s medical school, the Czech situation can be attributed to three key mistakes.  The first of these was a failure to make mask wearing mandatory, the second a decision to open shops in the run up to Christmas and the third a failure to react quickly enough to the presence of new strains in the new year.

Hopefully, it is clear to see that no single factor or measure can in and of itself entirely explain why any particular countries experiences a high death rate.  There are many factors working together in combination.

However, the nature of the pandemic is such that it is clear that just a few missteps at any stage can very quickly lead to the situation rapidly deteriorating.  Hopefully, we can all learn from that and avoid making any future silly mistakes in the final stages of the pandemic.

Synchronix is a full-service market research agency.  We believe in using market research to help our clients understand how best to prepare for the future.  That means understanding change – whether that be changes in technology, culture, attitudes or behaviour.

We provide a wide range of market research and data services.  You can learn more about our services on our website.  Also, please check out our collection of free research guides for more information on specific services offers.

Our world in data: https://ourworldindata.org/grapher/covid-stringency-index